Skip to content
For over four decades, relational data management remained a dominant paradigm for storing and managing structured data. However, the advent of extremely large-scale applications revealed the weakness of relational data management at dynamically and horizontally scaling the storage and querying of massive amounts of data. This prompted a paradigm shift, calling for a new breed of databases capable of managing large data volumes without jeopardising query performance by reducing query expressivity and consistency requirements. Since 2008 to date, a wide array of so-called non-relational or NoSQL (Not only SQL) databases emerged (e.g., Cassandra, MongoDB, Couchbase, Neo4j). This heterogeneity contributed to one of the main Big Data challenges: variety. The integration of heterogeneous data is the key rational for the development of semantic technologies over the past two decades. Local data schemata are mapped to global ontology terms, using mapping languages that have been standardized for a number of popular data representations, e.g., relational data, JSON, CSV or XML. Heterogeneous data can then be accessed in a uniform manner by means of queries in a standardized query language, SPARQL, employing terms from the ontology. Such data access is commonly referred to as Ontology-Based Data Access (OBDA). The term Data Lake refers to the schema-less pool of heterogeneous and large data residing in its original formats on a horizontally-scalable cluster infrastructure. It comprises databases (e.g., NoSQL stores) or scale-out file/block storage infrastructure (e.g., Hadoop Distributed File System), and requires dealing with the original data without prior physical transformation or pre-processing. After emerging in industry, the concept has increasingly been discussed in the literature. The integration of semantic technologies into Data Lakes led to the Semantic Data Lake concept. By adopting the OBDA paradigm to the NoSQL and Data Lake technology space, we realize the Semantic Data Lake concept and present here a summary about our progress.

To target the aforementioned challenges we have built Squerall, an extensible framework for querying Data Lakes. 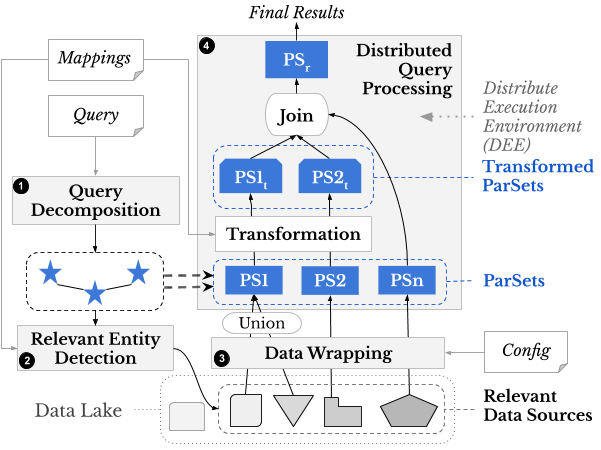 Squerall consists of four main components (see numbered boxes in the figure above). Because of Squerall extensible design, also for clarity, we here use the generic ParSets and DEE concepts instead of Squerall’s underlying equivalent concrete terms, which differ from engine to engine. ParSet, from Parallel dataSet, is a data structure that can be distributed and operated on in parallel; it follows certain data model, like tables in tabular databases, graph in graph databases, or a document in a document database. DEE, from Distributed Execution Environment, is the shared physical space where ParSets can be transformed, aggregated and joined together.

The fours components of the architecture are described as follows:

(1) Query Decomposor. This component is commonly found in OBDA and query federation systems. It decomposes the query’s Basic Graph Pattern (BGP, conjunctive set of triple patterns in the where clause) into a set of star-shaped sub-BGPs, where each sub-BGP contains all the triple patterns sharing the same subject variable. We refer to these sub-BGPs as stars for brevity; (see below figure left, stars are shown in distinct colored boxes).

(2) Relevant Entity Extractor. For every extracted star, this component looks in the Mappings for entities that have attributes mappings to each of the properties of the star. Such entities are relevant to the star.

(3) Data Wrapper. In the classical OBDA, SPARQL query has to be translated to the query language of the relevant data sources. This is in practice hard to achieve in the highly heterogeneous Data Lake settings. Therefore, numerous recent publications advocated for the use of an intermediate query language. In our case, the intermediate query language is DEE’s query language, dictated by its internal data structure. The Data Wrapper generates data in POA’s data structure at query-time, which allows for the parallel execution of expensive operations, e.g., join. There must exist wrappers to convert data entities from the source to DEE’s data structure, either fully, or partially if parts of the data can be pushed down to the original source. Each identified star from step (1) will generate exactly one ParSet. If more than an entity are relevant, the ParSet is formed as a union. An auxiliary user input Config is used to guide the conversion process, e.g., authentication, or deployment specifications.

(4) Distributed Query Processor. Finally, ParSets are joined together forming the final results. ParSets in the DEE can undergo any query operation, e.g., selection, aggregation, ordering, etc. However, since our focus is on querying multiple data sources, the emphasis is on the join operation. Joins between stars translate into joins between ParSets (figure below phase I). Next, ParSet pairs are all iteratively joined to form the Results ParSet (figure below phase II) . In short, extracted join pairs are initially stored in an array. After the first pair is joined, it iterates through each remaining pair to attempt further joins or, else, add to a queue . Next, the queue is similarly iterated, when a pair is joined, it is unqueued. The algorithm completes when the queue is empty. As the Results ParSet is a ParSet, it can also undergo query operations. The join capability of ParSets in the DEE replaces the lack of the join common in many NoSQL databases, e.g., Cassandra, MongoDB. Sometimes ParSets cannot be readily joined due to a syntactic mismatch between attribute values. Squerall allows users to declare Transformations, which are atomic operations applied to textual or numeral values.

We also record the time taken by the sub-phases of the query execution. Results suggest that Query Analysis and Relevant Source Detection phases have a minimum contribution to the overall query execution process, and that the actual Query Execution by Spark/Presto is what dominates the process.

Scalability of Query Execution Time versus Data Size. Spark-based Squerall in the left and Presto-based in the right.

Integration into SANSA and Usage

Spark-based Squerall has been integrated into SANSA Stack with a separate layer called SANSA-DataLake callable from the SANSA-Query layer, where it had so far three releases. See full details in its dedicated page.

Below is an example of how Squerall, SANSA-DataLake after the integration, can be triggered from inside SANSA-Query:

Output: resultsDF is a Spark DataFrame with the columns corresponding to the SELECTed variables in the SPARQL query.

For further reading and full details, we refer readers to the following publications: