In recent years, our information society has reached the stage where it produces billions of data records, amounting to multiple quintillion of bytes, on a daily basis. Extraction, cleansing, enrichment and refinement of information are key to fuel value-adding processes, such as analytics as a premise for decision making. For a better representation and capable of extracting desired information there is an effort of better representing such a large amount of data (e.g. metadata). The efforts have been made constantly. The most prominent and promising effort is the W3C consortium with encouraging Resource Description Framework (RDF) as a common data representation and vocabularies (e.g. RDFS, OWL) a way to include meta-information about the data. These data and meta-data can be further processed and analyzed using the de-facto query language for RDF data, SPARQL.

SPARQL serve as a standard query language for manipulating and retrieving RDF data. Querying RDF data becomes challenging when the size of the data increases. Recently, many distributed RDF systems capable of evaluating SPARQL queries have been proposed and developed.
Nevertheless, these engines lack one important information derived from the knowledge, RDF terms. RDF terms include information about a statement such as a language, typed literals and blank nodes which are omitted from most of the engines.

To cover this spectrum requires a specialized system which is capable of constructing an efficient SPARQL query engine. Doing so comes with several challenges. First and foremost, recently the RDF data is increasing drastically. Just as a record, today we count more than 10,0000 datasets available online represent using the Semantic Web standards. This number is increasing daily including many other (e.g Ethereum dataset) datasets available at the organization premises. In addition, being able to query this large amount of data in an efficient and faster way is a requirement from most of the SPARQL evaluators.

To overcome these challenges, in this paper, we propose Sparklify: a scalable software component for efficient evaluation of SPARQL queries over distributed RDF datasets. The conceptual foundation is the application of ontology-based data access (OBDA) tooling, specifically SPARQL-to-SQL rewriting, for translating SPARQL queries into Spark executable code. We demonstrate our approach using Sparqlify, which has been used in the LinkedGeoData community project to serve more than 30 billion triples on-the-fly from a relational OpenStreetMap database. 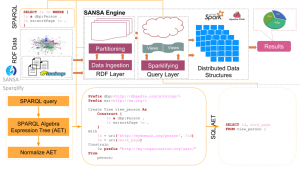 The overall system architecture is shown in Fig.1. It consists of four main components: Data Model, Mappings, Query Translator and Query Evaluator.
In the following, each component is discussed in details.

How to use it

The component is part of the SANSA Stack, therefore it comes as implicit of the SANSA. Below, we give one examples of the Sparklify approach which can be called using the SANSA API.

The Sparklify has been piped into the SANSA-Notebooks as well, therefore users can use it without many configurations beforehand. SANSA-Notebooks is developer-friendly access to SANSA, which provide a web-editor interface for using the SANSA functionality.
Full example code: https://github.com/SANSA-Stack/SANSA-Notebooks/wiki/Query-notebook#sparklify-example

The goal of Sparklify evaluation is to observe the impact of the extensible VP as well as analyzing its scalability when the size of the datset increases.
At the same time, we also want to measure the effect of using Sparqlify optimizer for improving query performance.

In the following, we present our experiments setting including the benchmarks used and server configurations.

We used two well-known SPARQL benchmarks for our evaluation. The Lehight University Benchmak (LUBM) v3.1 and Waterloo SPARQL Diversity Test Suite (WatDiv) v0.6.
Characteristics of the considered datasets are given in Table. 1.